Alexandria is quite popular port city on the Mediterranean Sea in northern Egypt. It was founded in 331 BCE by Alexander the Great. The main reason of its popularity is its antiquity. The great lighthouse, Pharos ,is considered one of the seven wonders of the ancient world, for the Temple of Serapis, the Serapion, which was part of the legendary library at Alexandria. The city grew from a small port town and become the grandest and most important metropolis in ancient Egypt.

After conquering Syria in 332 BCE, Alexander the Great swept down into Egypt with his army. He founded Alexandria in the small port town of Rhakotis by the sea. He designed the plan for the city which was so greatly admired later by the many historians. The city has magnificent public precincts and royal palaces which cover a third of the entire area. Alexandria was the intellectual capital of the world and famous for its extensive library, which in the 3rd century BC was said to contain 500,000 volumes. Besides library, the Museum there was a center of research, with laboratories and observatories, and had scholars such as Euclid and Eratosthenes working there. Alexandria was also a center for biblical studies. The chief librarian commissioned the Septuagint, which was the oldest Greek version of the Old Testament.

Alexandria was a trading post between Europe and Asia, and famous for its easy overland connection between the Mediterranean Sea and the Red Sea. During its three earliest centuries, it was perhaps the leading cultural center of the world, home of different religions and different philosophies. It was once the center of the Hellenistic Empire, and the hub of scholarship and commerce in the ancient world. Greek scholars, Roman emperors, Jewish leaders, fathers of the Christian Church, mathematicians, philosophers, scientists, poets, and other intellectuals flocked to Alexandria. All these people were basically attracted by Alexandrian Library and Museum. 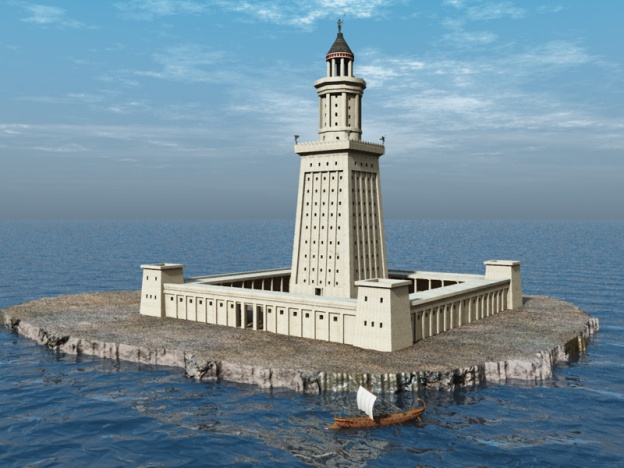 You are interested to know about different attractions of world’s great city, Alexandria. You might also be interested why and how it was once like a magnet for all intellectual people. Then continue reading, you will find the answers of all your questions.

The famous Pharos Lighthouse was a welcome sight for travelers. Alexandria acted as a beacon for merchants, curious tourists, religious prophets, and most importantly, the finest intellectual minds of the times. After the fall of this great city, the great lighthouse was steadily destroyed by earthquakes as was much of the port. According to historians, Alexandria was the first city of the civilized world in terms of size, elegance, riches, and luxuries. This city had once known for everything imaginable to fill the needs of the body and soul.

This not was not only once among the greatest cities of the Mediterranean world but was a centre of Hellenic scholarship and science. It was the most attractive city for scholars, scientists, philosophers, mathematicians, artists, and historians. Eratosthenes (c.276-194 BCE) calculated the circumference of the earth to within 50 miles (80 km) at Alexandria. Euclid taught at the university there. Archimedes (287-212 BCE) the great mathematician and astronomer may have taught there and was certainly studied there. The greatest engineer and mathematician of his day, Hero (also known as Heron, 10-70 CE) was born and lived in Alexandria.

It is said that Alexander the Great had a dream as he slept one night. He had a vision in which he learned the location for his new megalopolis, and decided to make this city as a capital for his empire. He builds a new suburb beside the old town and called old and new jointly after himself, Alexandria. At that time, it was only a small fishing village but then it was a place where the humanity did live together with tolerance for one another's cultural and religious ideologies, a life of freedom.

The magnificent library of Alexandria took a long time to come into being. It begun under Ptolemy and was completed by Ptolemy II who sent invitations to rulers and scholars asking them to contribute books. No one knows how many books were held in the library at Alexandria but estimates have been made of 500,000. The city remained prosperous and continued to attract visitors from all over the world, even after the fall of Carthage following the Punic Wars (264-146 BCE), when Rome became supreme and Alexandria fell under her sway.

In 48 BCE, the increasing tensions in Rome between Julius Caesar and Pompey first impacted Alexandria negatively. Following the Battle of Pharsalus, at which Caesar defeated Pompey, Pompey fled to Alexandria seeking sanctuary and was killed by the co-regent Ptolemy XIII. Then the Caesar arrived and declared martial law. He took over the royal palace, and sent for the exiled co-regent Cleopatra VII. According to some scholars, in the civil war much of Alexandria was burned including, the famous library.

How to make Fake Teeth that look Real?